About the Bourne Conservation Group

Founded in 2003, the Bourne Conservation Group is a volunteer organisation with the aim of assisting in the maintenance and improvement of public open areas and rights-of-way in The Bourne for the benefit of the natural environment, residents and wildlife. The need for such a group has arisen from mounting pressures on the local environment and the inability of the responsible authorities to allocate sufficient priority or funding to routine conservation tasks.

The group has worked successfully in collaboration with the local authorities to introduce a more sympathetic and constructive management regime in the patches of woodland in public ownership and along the many miles of footpaths and bridleways that criss-cross the area.

Initially the focus of activity was on clearing heavily overgrown footpaths and removing uncontrolled invasive vegetation, such as laurel and holly, from the woodland patches. Progressively it has been possible to move onto more constructive tasks such as planting native shrubs and trees, building rustic steps and undertaking wildlife surveys.

From the outset, the group has worked with other local volunteer groups, especially the Bourne Residents Association. It has also established links with neighbouring conservation organisations and groups. Joint sessions have included building an otter holt on the Wey with RSPB volunteers and undertaking coppicing of willows with the Friends of Farnham Park.

In 2005, the Bourne Conservation Group has spread its wings. As a major initiative it has partnered the Surrey Wildlife Trust in a pilot scheme for the introduction of Wildlife Wardens in the county with the results shown on another page on this website.

Two other new ventures have been:

An extension of footpath work with Surrey County Council by carrying out a systematic survey of signposts in the area. This has already paid off through the repair and replacement of many finger posts and way markers by council contractors.
Making a start on the clearance of Himalayan Balsam from The Bourne Stream. Very successful, but requiring repetition for several years to come before the menace is fully beaten.

All the work of the Group is in accordance with its Constitution which was agreed by the membership in 2003. 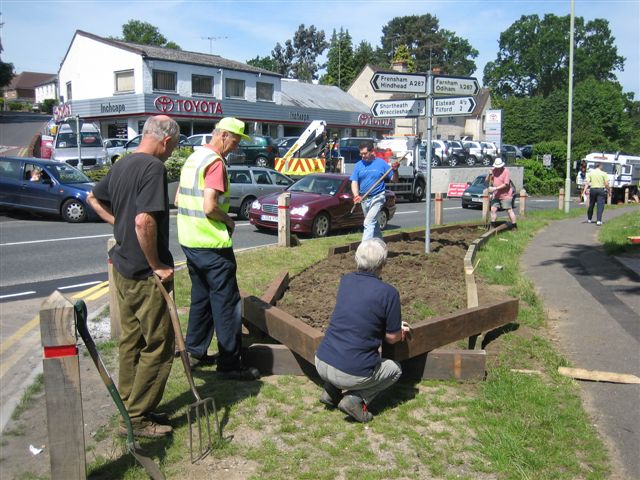 Work in progress on the Bourne Embankment project in summer 2006