The project we have started to improve aspects of the ecology of The Bourne Stream is of limited scope but it needs to be set against the wider background of work being planned for its parent river. The river Wey corridor has been identified as an Area of Biodiversity Opportunity and, with a view to realising its potential, the Surrey Wildlife Trst is leading a Partnership of all the interested parties of which our small Group is one. The initial tasks of this Wey Landscape Partnership are to: 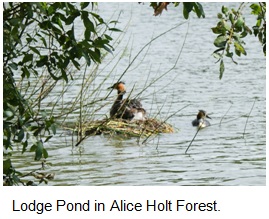 We have identified three sectors along the course of The Bourne Valley which is the dominant geographical feature of our area:

From Alice Holt Forest to Sandrock Hill Road. Including the Lodge Pond, this is a predominantly rural area with woodland and farmland, for example near Manley Bridge.

From Sandrock Hill to the Tilford Road. Although there are some open spaces in this sector it is largely urban in aspect and becoming increasingly so. There are many riparian owners whose land adjoins the stream and they have responsibility for maintenance.

From Tilford Road to the river Wey. Once again this is a rural sector with the stream flowing through the Redhill House estate and a large meadow called Compton Field. The final stretch is through pastures between Waverley Lane and the confluence with the Wey.

Thanks largely to Martin Angel we have conducted a photographic survey of the whole length of The Bourne Stream and you may see the results at Preliminary Survey Report. When we put all the results together they portrayed a dismal picture of the state of the watercourse and its banks arising from years of neglect by all parties. Some of the main problems are:

Faced with this we have now written a Project Plan to tackle the problems by stages. The main effort initially will be on Sector 3 from Tilford Road to the confluence with the Wey. To that end we are bidding for money in the hope of starting in early 2013. Our aims are entirely consistent with those of the Wey Landscape Partnership and the Farnham Rivers Group. Given a successful outcome they should result in greatly improved ecology along parts of the valley ? but there is a long way to go. 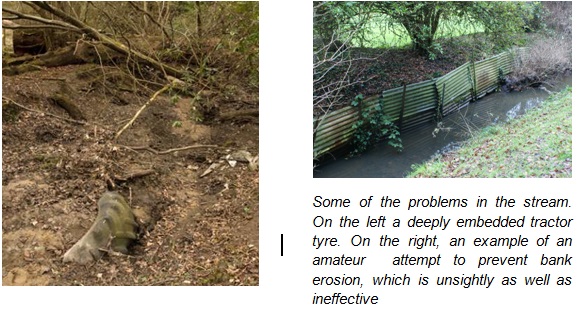 At the end of 2012, following an assessment of the survey report, we wrote a project plan to progressively deal with some of the problems in the valley. Fortuitously, at that precise time, an opportunity to bid for funding for a water-related project was offered by South East Water. We took the trouble to write a good case and were successful in being awarded ?2.5k for work in the lower reaches between Tilford Road and Waverley Lane. Our press release following the announcement said:

After due consideration and close scrutiny of the weather forecasts, we decided to implement the work at the earliest opportunity in February 2013.

This phase of the project consisted of two parts:

Clearance of litter in the stream bed and a large pile of builders fly tipping near Waverley Lane.
Forestry work along the stream to remove fallen trees and other obstructions, and to cut back some of the invasive rhododendrons.

The pictures tell the story of the main work but there were follow-up tasks. These included disposing of the materials of the old fence along the stream in Compton Field and liaising with the landowners over dealing with the large clumps of Japanese Knotweed. By the end this stretch of The Bourne Stream was in its best condition for many years.

Later in 2013 we returned to the stream for a routine check on Himalayan Balsam growth. Although the valley is largely clear as a result of our efforts over many years, there are always some fresh outcrops to deal with. This year there was a substantial on in Kiln Lane where the plants had been hidden behind a garden fence and were only revealed when the fence fell down! Much remains to be done along other parts of the watercourse, but a good start has been made on work that goes to the heart of what we are trying to achieve in The Bourne area for the benefit of the local environment. 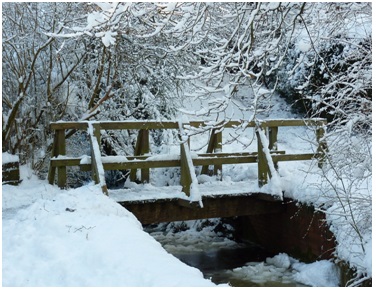