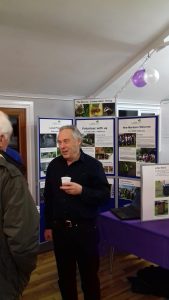 2018 is expected to be a significant year in The Bourne because of the provision of a new cricket pavilion on The Green. This is planned to be a model construction giving not only excellent facilities for the village sports teams but also meeting and entertainment possibilities for the whole community. To mark the opening of this important year a Community Party was arranged in St Martin’s Hall on the evening of 2nd January by the cricket club who kindly invited other organisations to participate.

Our Group was delighted to accept this invitation and set up an informative display and provided a small finger buffet.  In addition to portraying the general work of BCG, the display featured in particular the elements of a small project which is in its early stages to enhance the furniture and trees of The Green in keeping with the advent of the new pavilion. This joint effort between Waverley Borough Council and voluntary organisations is expected to include replacement of the inadequate, open-topped litter bins, the gradual improvement of seating arrangements and a rebuild of the steps down to Cricket Lane which in fact were built by BCG in March 2004. Also to be included is the planting of new trees to replace gaps in the current ring of trees. The species to be planted is currently under discussion and we are advocating an emphasis on native species so as to enhance biodiversity as well as improving the landscape. The hornbeam pictured we believe would be a good choice.

The Party was well attended, mainly by those already contributing to local life, and we got a good response to both our stand on the night and our work put in throughout the year. It was certainly an event worth attending and we thank the cricket club for the opportunity. 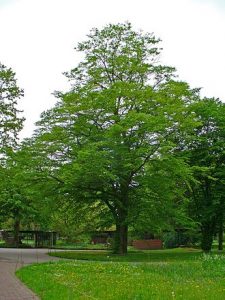