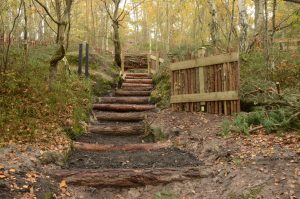 The Bourne Conservation Group (BCG) has recently completed one of its largest projects for some time, at the end of a year in which the Group has played a significant part in the success of Farnham in Bloom whilst continuing to maintain key sites and open spaces in The Bourne for the benefit of the environment.

A team of BCG volunteers has assisted in the building of a flight of rustic steps in Sable Wood, the area of the Bourne Woods closest to Lower Bourne. Sable Wood is 6 acres of woodland owned by Bruce Callander, who is doing a wonderful job in managing it for wildlife and improving the environment. In recent years his programme has involved replanting trees that are friendly to insects and birds, creating conditions for undergrowth to provide food and shelter for wildlife, and providing suitable habitats.

The wood is crisscrossed with public footpaths, one of which runs down a steep slope and has been eroding for some years and has become difficult to walk on. Hence the need for some steps and associated works using a lot of timber produced on site. The team worked with Bruce for most of the last week of October, and the job involved assembling materials, sawing timber, knocking posts and pegs into the ground, and not least digging and moving soil. All this time the path remained open although walkers and dogs were asked to divert. The plans were agreed with Surrey County Council’s footpaths officer, who arranged for certain materials to be delivered to site.

The job is now complete and has been much admired. The scale of the work can be seen in the photos of the path ‘before’ and ‘after’. BEFORE – a new shortcut had been opened up just to the left, adding to the erosion. AFTER – the shortcut has been sealed off and filled with brash to prevent further erosion. The first group photo is of members of BCG plus the Surrey Choices team, with Bruce at the front. The second photo is of BCG volunteers taking a break.

Noel Moss, Chairman of BCG, said “Our members have helped in Sable Wood on several times occasions, but this has been far the largest joint effort to date. It is a neat answer to a footpath problem that preserves the rustic atmosphere of The Bourne Woods. It has been hard work but we are always pleased to be able to help with Bruce Callander’s excellent conservation programme in this piece of woodland.”

Bruce Callander said “I was very impressed by the energy and commitment of the BCG team. Some of the logs for the steps could barely be lifted by three people, yet over two days the BCG team manhandled a dozen such logs into position.” 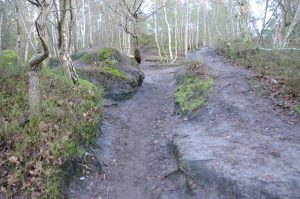 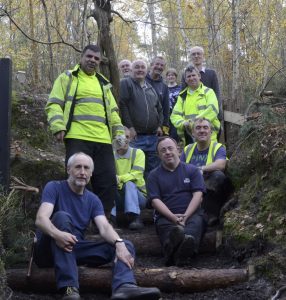 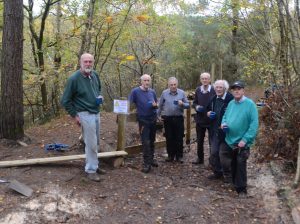