Shortly before Christmas, our Group completed a significant piece of work in the Old Churchyard, Vicarage Hill. The surface through the lychgate had remained unchanged since the 19th century and was rough, stony and muddy in bad weather. With the agreement of all parties concerned we have now replaced this with paving which has been generously funded by a donation from John Maddox in memory of his wife, Wendy Maddox, who died on 22nd April 2018. Wendy had collated information about those who are buried in the churchyard, as well as other extensive local history research throughout the area.

END_OF_DOCUMENT_TOKEN_TO_BE_REPLACED 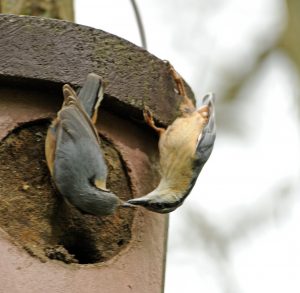 A first for our Group was the evening event we put on at St Martin’s Hall, Lower Bourne on 23rd October 2018, open to all residents. The main attraction was a talk by Martin Angel ‘Exploration of the Natural History of The Bourne’ which was accompanied by a large selection of his outstanding photographs. END_OF_DOCUMENT_TOKEN_TO_BE_REPLACED

Twenty one Members and Friends of the Bourne Conservation Group attended the 16th Annual General Meeting at Noel and Edelgard Moss’ home on Sunday 16th September 2018. Everyone was saddened to hear of the recent death of Wendy Maddox who had undertaken so much historical research for the Group.

As Chairman, Noel Moss presented the Annual Report covering the achievements of the Group for the year ended 31st March 2018, a biodiversity report, on which Martin Angel spoke, and a look forward to the work the Group will undertake in the coming year. He stressed the need to recruit new members, while welcoming the involvement of a number of young people pursuing their Duke of Edinburgh Awards. The Financial Report showed no great change from the healthy position last year, but arrangements were in hand to acquire more funding for projects in 2019.

END_OF_DOCUMENT_TOKEN_TO_BE_REPLACED

A new and decidedly undesirable alien species has recently arrived in this country. It was sighted both in Guildford and in New Alresford this September. They pose a real threat to honey bees and other pollinators if they become established.

Any sightings should be reported immediately to the Non-Native Species Secretariat, or to BCG if preferred and we will deal with it. The Secretariat has issued a poster on how to recognise this menace and how to report it. 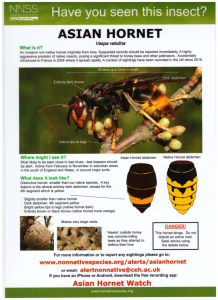 Thanks to collaboration between the Bourne Conservation Group (BCG) and Farnham Town Council a little known piece of greenspace in South Farnham has a very attractive new oak gate. Battings Garden is situated at the junction of the A287 road and The Ridgeway, just by the traffic lights, with a hedgerow along the Ridgeway Road boundary which until 2016 had an iconic oak gate. The memorial plaque, now gracing the new gate, proclaims that the garden was presented to the town in 1933 by Walter Batting Esquire.  END_OF_DOCUMENT_TOKEN_TO_BE_REPLACED 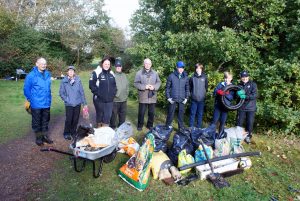 Langham’s Recreation Ground is a popular open space on The Ridgeway, South Farnham, named after the founder of the Farnham Herald who gave the land to the town. The Bourne Conservation Group (BCG) has in recent years been working with Waverley Borough Council to keep the area as attractive as possible. To make it more friendly for wildlife some areas of grass have been left uncut and the wooded area cleared of invasive plants as far as possible. END_OF_DOCUMENT_TOKEN_TO_BE_REPLACED

We are pleased that the Farnham Herald used the following report in their most recent issue:

Gardeners in Farnham are facing a new villain – the box-worm moth. Caterpillars of this moth introduced from China are stripping the leaves of box shrubs in gardens. The beautiful topiary and box hedging in classical gardens are being laid bare, and this is after many have suffered from box blight.

END_OF_DOCUMENT_TOKEN_TO_BE_REPLACED

We are very aware of the value of this award scheme, also known as DofE. It is available to all 14-24 year olds and is designed to equip young people for their lives ahead irrespective of their background, culture, skills and interests. Since its launch over 60 years ago it has widened the horizons of millions of youngsters world-wide and in many cases helped to transform their lives.

END_OF_DOCUMENT_TOKEN_TO_BE_REPLACED 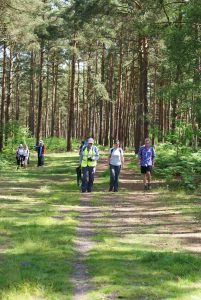 The theme this year for the Farnham Society’s Heritage Open Days is Green Spaces and so where better to go than The Bourne? Here we not only have small pieces of green space within the urban area but we have direct access to the Surrey Hills Area of Outstanding Natural Beauty , the boundary of which runs along the eastern part of Dene Lane. We are therefore offering a guided walk appropriately starting on The Bourne Green and proceeding through the ever-popular woodland and heathland to the south including Sable Wood, Bourne Wood and the RSPB Farnham Heath reserve. END_OF_DOCUMENT_TOKEN_TO_BE_REPLACED