A project to improve The Bourne Crossroads embankment

In its early days, The Bourne Conservation Group worked in close partnership with the local authorities to assist them in the maintenance of rights of way and open spaces in the local area. These activities continue but gradually, as the Group expanded in size and developed its skills, additional opportunities to enhance the community became apparent and so the idea of running independent projects was born. The first of these was at the busy crossroads in the village where there was a strip of land with no clear ownership that was overgrown with poor quality trees and shrubs, and becoming something of a dumping ground. This was discussed with a new contact, Dave Symonds, the County Landscaping Officer, who was not only supportive but went to a great deal of trouble to help draw up a plan of attack. The aim was to improve the approach to the village along the A287 road by clearing the embankment and establishing it as a small haven for wildlife. The introduction of native wildflowers was key to attaining this goal. A small steering committee which included Dave and Cllr Carole Cockburn was set up to guide the early stages of the project. Consultations also took place with the Bourne Residents Association and neighbours’ to the site. Funding was obtained through a grant from Farnham Town Council and a generous donation from Stuart Oldroyd, a local resident. 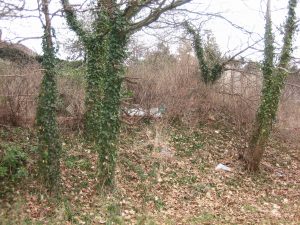 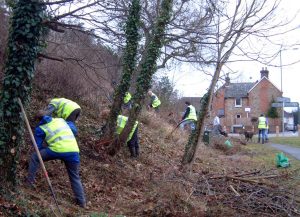 Work started on 19th February 2006, coinciding with the first use of the Group’s Hi-Viz jackets. Good progress was made at this and the other sessions that followed. Tony Anderson and his team from the Blackwater Valley Countryside Partnership  kindly felled the low value trees and a contractor was employed to rotovate the bank. This allowed seeding to take place at the end of March, the last date to guarantee some flowers that summer. The succeeding month was quite wet and so a good display of annual wildflowers was in evidence in early summer with a few perennials apparent somewhat later. The basic seeds used were from a Standard Cornfield Mix consisting of corn cockle, cornflower, corn chamomile, corn marigold and common poppy. The perennial mix was one specifically tailored for sandy soil. 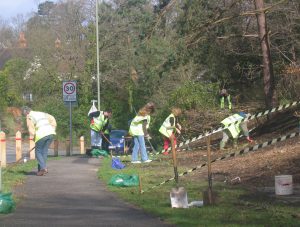 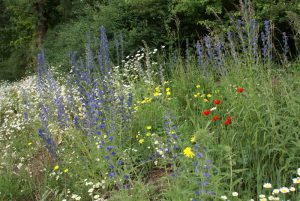 In parallel with these voluntary activities the surrounding area was undergoing a number of changes. Surrey County Council (Highways) modified the road layout at the crossroads and installed oak bollards to prevent parking on the grass verge, and the building of a new block of 5 flats started on the adjacent corner site. Once all of this had settled down the Group was able to take stock and commence some follow-on work later in 2006 and in 2007. The main features of this were:

With the cooperation of the head teacher, the children of The Bourne Infants School assisted with planting of both the embankment and the new raised bed, where their nasturtiums did well for several years. The combination of the raised flower bed and the restored seat, backed by some reasonable plants soon became an attractive feature of this increasingly busy corner. 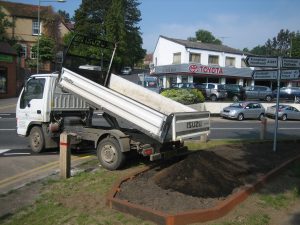 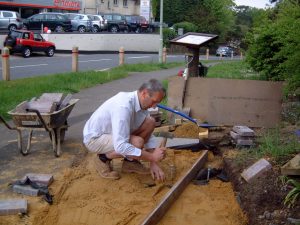 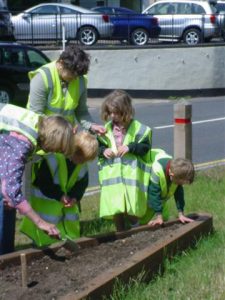 One new venture which grew out of our footpath activities was to renovate and plant a disused raised bed at the foot of Granny Cook’s Steps on the way to the Bourne School. This was very successful and has provided a splash of colour every Spring and Summer since. 2009. For a time, also, we looked after the raised beds outside the corner shop which for a time became a popular community café. 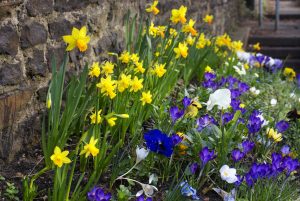 By 2009 the initial Crossroads project was complete and had been successful in transforming this small stretch of no-man’s land into an attractive site for local residents and the many people travelling through the village on the A287 road. More importantly from our point of view it carved out a small area of valuable habitat for birds, bees and insects on a busy urban corner. It also raised the confidence of the Group in its own ability and thus laid the foundation for future biodiversity projects.  It is also interesting that the restoration of the bench seat (which is a presentation item) was the first time BCG had attempted work associated with the heritage of The Bourne village and this was to be extended in the Old Churchyard project.

Changes in the Area

Life at The Bourne Crossroads did not stand still, indeed it has been subject in recent years to major changes. In March 2011 Broadband  communications arrived in the village with the arrival of a second BT cabinet which, initially, was placed in the wrong position (as shown in the photo) and had to be moved, causing considerable disruption both above and below ground. In 2013 more significant work took place on the opposite side of the road with the building of 14 houses on a new road, Blackthorn Close, bounded on one side by the universally loathed high wall. This was followed by the installation of a controversial pedestrian crossing. 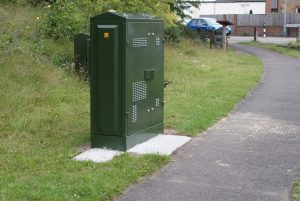 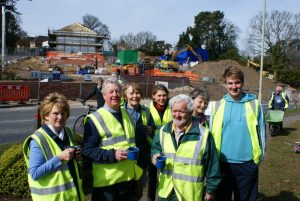 In parallel with these developments a new voluntary initiative emerged which became known as the Beautification Project. This started with the concerns of Cllr Cockburn and others at the speed of traffic on the A287 which had increased greatly after the Police stopped enforcement by means of regular radar traps. The idea was to try to persuade motorists to slow down by a series of “soft” measures, something that was being tried out in other communities.  To this end the two main measures  implemented in The Bourne by a joint effort between BCG and The Bourne Residents Association (TBRA) were the installation of Lower Bourne signs at each end of the village and a coordinated set of flower tubs and hanging baskets. 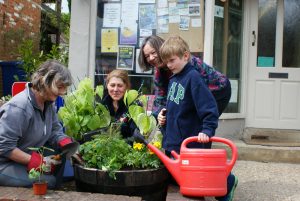 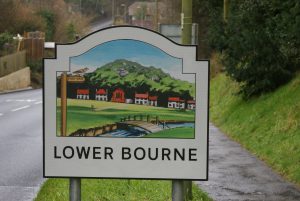 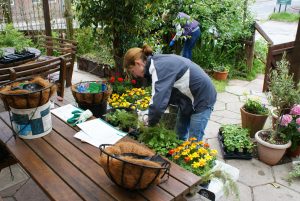 However, a  raft of other improvements was made in partnership with SCC Highways. Chief amongst these were the rebuilding of the timber framed raised flower bed with natural stone and replacement of the directional finger post, both of which BCG had been wanting to get done for sometime.

The initial design of the flower tubs was the work of Hilary Dickson who also organised the Spring and Autumn re-planting for several years, a task subsequently taken over by Valerie Nye of TBRA. Planting the raised bed fell to BCG and was undertaken by Cathy Stewart who produced a stunning design. In 2014 the combination of floral displays at the Crossroads was considered sufficiently good to be included in Farnham’s entry to the In Bloom Competition and this continued through to 2017. In that year the national judges commented on the “exceptional planting” in The Bourne which  played a leading part in the town’s achievement of its first gold award at that level.  Also in that year Cathy had gone on to design an equally outstanding bed in Middle Bourne Lane.

A list of the plants used in the raised bed is available here:  The Raised Bed at The Bourne Crossroads 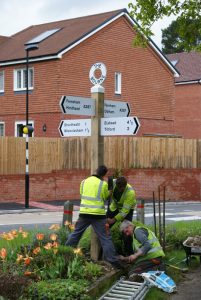 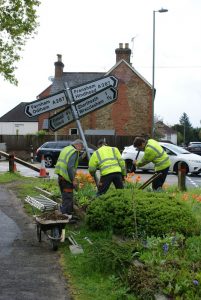 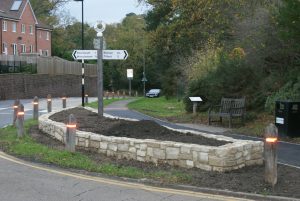 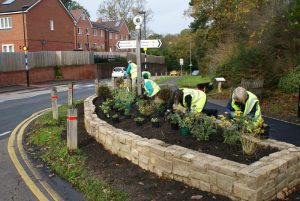 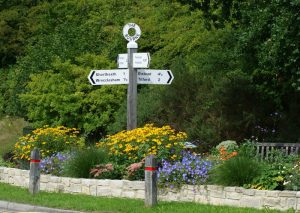 The site was initially surveyed by Isobel Girvan of Surrey Wildlife Trust in September 2005 who concluded that “there is little of interest on this site at the moment. It is a small fragmented piece of land that is currently not being managed.” It was later mapped by the Chairman of BCG, Stan Cockett, who also took soil samples. Since that time it has been managed as a small but important part of  Farnham’s Green Infrastructure. Linking with other elements of the wildlife corridor along the A287, such as the Spring flowering bulbs at Sturt Walk and on Gravel Hill. The later addition of tubs and baskets at the shops has increased the corridor effect, albeit thinly.

At the outset the better trees including oaks, Scots pine and hawthorn were  retained as were patches of gorse. Some species including rhododendron and laurel were  removed. Subsequent fresh planting included:

Bulbs for crocus and tete a tete daffodils along the grass verge between the oak bollards and at the base of the embankment.

Wildflowers. Initially these did well but were overcome by coarse grasses and, despite several attempts, have failed to establish themselves.

The raised bed has been kept as a flower border with the aim of providing all year colour at this prominent point as well as nectar and pollen for pollinators. As noted above, the present iteration has been highly successful in this regard. Planting in the bed is reinforced in Spring by alliums and tulips to match seasonal planting in the tubs and baskets.

The intention for the future is to carry out further work at the northern end including taking out more rhododendron and small sycamores. Also to continue to try to establish wildflowers on the embankment. To this end a small trial of a new seed mix will take place in 2018. 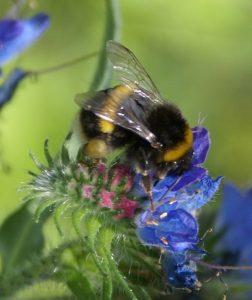 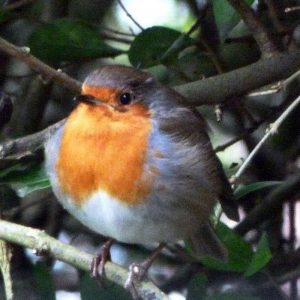 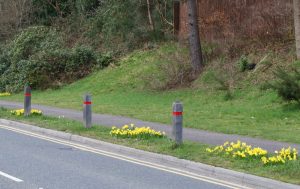