A wild flower (or wildflower) is a flower that grows in the wild, meaning that it was not intentionally seeded or planted.  There are many hundreds of them in the UK.  Some, like orchids, are rare but others, like the dandelion, are so common that they are often referred to as weeds. Other common species are well known and well appreciated by the public. The spring-blooming primroses and bluebells are in this category and it is always a delight to find them when out for a woodland walk. 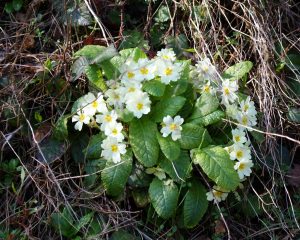 Their place in the Landscape

Whether they are considered iconic symbols of the countryside or just get in the way of gardeners, wildflowers are an essential building block of all our various landscapes and habitats. Very broadly, important groups are to be found in woodland, grassland and wetland but the variations are immense.  Farnham is fortunate in having a very varied landscape and as a result there are widely differing groups of wildflowers on the chalk grasslands of the Hogs Back and Farnham Park, the wetlands of  Wey valley through the centre of the town, the woodland of Alice Holt Forest and the sandy heathlands of Farnham Heath and Frensham Common. These differences of plant life are reflected in the populations of birds, bees, butterflies, moths and other animals that are to be found in these areas. For wildflowers are not just an attractive feature of the landscape, they are a vital source of pollen and nectar.

The serious reduction in wildflowers

Sadly wildflowers are not nearly as common as they once were. A hundred years ago Britain’s countryside was a very different place to that of today. At that time it would have been awash with colourful, flower-rich meadows and grasslands that were an intrinsic part of agriculture and people’s daily lives. Meadows developed as a result of traditional farming practices. Each small farm would have grown a few crops, had permanent pasture for grazing and fields for hay that were cut and stored to feed the livestock over the winter. Management followed an annual cycle of growing in spring and summer, cutting in late summer and grazing in winter. The turning point came during the Second World War when six million acres of grassland were ploughed to grow cereals, starting the inevitable decline. Since then the process has continued with evermore intensive agricultural practices. Other factors hastening the decline have included the unintentional introduction of alien invasive species such as Himalayan balsam, Japanese knotweed , gaultheria and rhododendron which take over large areas and overwhelm the natural biodiversity.

It was not until about 30 years ago that the true impact this combination of intensive farming, invasive species and increased building of housing and roads was having on the countryside.  Since 1945 40% of broadleaved woodland, 80% of heaths, 95% of unimproved meadows and 125,000 miles of hedgerows have disappeared. This has had a dramatically negative effect on wildflowers and the ecosystems of which they are part.

Once the problems had been recognised, moves were taken to try to redress the balance. In the “set-aside” initiative farmers were encouraged to leave strips around the edges of their large fields where wildflowers and farmland birds could flourish, gardeners were encouraged to plant what many had previously considered weeds in their plots and councils were required to introduce road verge habitat plans to help conserve wildflowers.  A very recent drive is to  encourage gardeners to cut their lawns less to allow buttercups, daises and other wildflowers to flourish once again.

In a small way The Bourne Conservation Group is doing what it can to reverse these undesirable trends in our local landscape. A good example is the removal of Himalayan balsam along the valley of The Bourne stream to allow native wild flowers to flourish again. Also, many wildflowers have been planted in the local area. The spring-flowering daffodils and crocuses along roadside verges such as on Gravel Hill are the most obvious examples. Those generated from seeds or plants have proved less easy to get started.  In this little meadow wildflowers have been grown from seeds, the latest attempt  being from a new mix of 40 species of flowers and grasses claiming to be suitable for any type of soil. An attractive plant called yellow rattle has been added as this weakens aggressive grasses, thus assisting the wildflowers to flourish. Many other mixes are available and new ways of planting have emerged such as  the use of seeds already

Working to improve the local environment

Planting wildflowers is one of a number of ways in which The Bourne Conservation Group is striving to enhance the biodiversity of the local area while, at the same time, improving the landscape for residents throughout the year