Geology of The Bourne
The Bourne lies at the western extremity of the regional geological feature, the Weald. The Weald is an east-west trending eroded fold, exposing older rocks between the Upper Cretaceous chalk of the North and South Downs. Thus, most of The Bourne is located on the Folkestone Beds of the Lower Greensand which dates from the Lower Cretaceous age, some 130 million years ago. It gives rise to sandy well-drained terrain with thin leached soils. However, in the far west and southwest of the area (towards Rowledge) the overlying Gault Clay (also of Lower Cretaceous age) is preserved at the surface to give thicker, wetter soils. On the higher ground, both have a thin and patchy veneer of recent river gravels (associated with the last Ice Age, which ended 10,000 years ago), giving a flinty gravel surface.

Two streams, The Bourne and The Frensham Vale Stream, rise on the Gault Clay in the west, flow north-eastwards through the area and join the northern branch of the River Wey between Compton and Tilford. Both have cut deep into the Lower Greensand to form two incised valleys: Bourne Valley and Frensham Vale. These separate three prominent, parallel ridges, which are best described as the Ridgeway, Burnt Hill and Gong Hill.

How the underlying geology together with human development have determined the vegetation of the area and hence its wildlife is dealt with under ‘Ecology’.

The River Wey – “The zig-zag Wey” Most rivers just meander, but look at the local map below and you see that the Northern branch of the River Wey that flows through Farnham not only meanders, but performs a great zig-zag. Just near the Shepherd and Flock roundabout it turns abruptly to the southeast to flow through the mini-gorge of the Waverley Valley near Moor Park, past the site of Waverley Abbey and on to Tilford. Then, shortly after it is joined by the Southern branch that drains both the Great and Little Frensham Ponds, it abruptly turns again, so that it flows eastwards towards Godalming. To the east of Godalming (beyond the area covered by the map) it again turns abruptly left and flows northwards through a fault-line in the chalk (which provides a zone of weakness to erosion) near Guildford. How is all this to be explained?

The geology around the River Wey at Farnham runs southwest/northeast with the chalk to the north and the Gault Clay and Lower Greensand to the south. Linear gravel beds lie on the higher ground flanking both sides of the river, the erosional remnants of earlier more extensive deposits.

About ten million years ago there were two rivers in the area that drained the high ground around Hindhead to the north. Both these rivers flowed into the Thames Basin. One of these was the forerunner of the River Blackwater, which then flowed past where Tilford is now situated, and on through another fault-line in the chalk just to the north of the Shepherd and Flock. The second river to the west flowed along a parallel course between Farnham and Crondall. This river was the first to lose its head waters through river capture to the River Blackwater, eroding back along the valley to the west of Farnham. This is now occupied by the Northern branch of the Wey flowing from Alton. At much the same time the River Wey at Godalming was eroding its channel back towards Elstead and Tilford. The next river capture was when the Wey intercepted what was then a major branch of the River Blackwater at Tilford. In so doing, it also captured all the streams draining the high ground around Hindhead and became the Southern branch of the Wey. For a time, probably little if any water was flowing through the Waverley Valley, but once again, around the last Ice Age, the River Wey made yet another river capture. This time it was at the expense of the other headwater stream of the Blackwater. In this it was probably aided by the northward flow of the Blackwater being blocked by the glacial ice sheet advancing from the north and so diverted the water back through the Waverley Valley again. This final river capture completed the Wey?s zig-zag course that we see today. It also resulted in the River Blackwater being a ?misfit?, a river that flows in a valley much larger than the current water flow could produce. 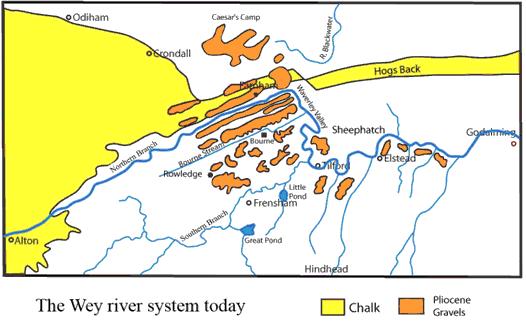 These past geological events are not just an esoteric background, but provide us with key insights into the factors that have determined the pattern of our present environment. For example, they determined the routes taken by our roads; the steeper slopes are incised by sunken lanes such as Sheephatch Lane, which are ancient trackways leading down to river crossing points. In the days of stage coaches the Greensand and gravels provided dry routes that were passable in all weathers. In the mid-nineteenth century, the gravel began to be excavated to provide materials needed for the building of the railway line and modern roads (and incidentally the gravel pits became a rich source of Stone Age artefacts). Gravel and sand excavation is still commercial (for example at Runfold and Tongham).

The resulting drainage pattern also determined where watermills were built and operated along the river, where the risk of flooding is now the greatest, where villages and Waverley Abbey became sited ? the Cistercian monks were great water engineers and made the ponds at Frensham. In terms of the area?s natural history, they determined where Surrey?s largest alder swamp is to be found (just upstream of Waverley Abbey), why the River Wey at Farnham is a chalk stream but changes character beyond its confluence with the more acidic waters flowing in at Tilford, and maybe why Canada geese are so abundant in the Waverley Valley.