Ecology of The Bourne

Ecology is concerned with the relationships between different natural species and with the environment in which they live, taking into account the effects of human intervention. Today it is an extremely relevant subject both globally and in the very limited area of The Bourne.

The poor, sandy soil of the Folkestone Beds gives rise to heathland which ranges from true heath with hardly any trees or scrub, to semi woodland. The large tracts of Surrey heathland at Thursley, Crooksbury and Frensham are examples. This also used to be the natural vegetation in The Bourne and traces of it remain for the sharp eye. Mostly, however, it has been replaced by woodland, much of it resulting from the planting of pinetrees. These are not old-established in this area. Originally there were just three stands of pine on land owned by the Bishop of Winchester but, during the Second World War, commercial planting took place as can be seen in Bourne Woods running down towards Frensham. This issue has recently achieved prominence through the work of the RSPB which has started a major project to fell some 400 acres of pinewoods at the southern boundary of The Bourne to allow the original heath to reassert itself.

Thus, over the years, human development has come to dominate the local environment. In The Bourne area a number of ecological bands can be distinguished, following the grain of the land from southwest to northeast. The Bourne Conservation Group has designated these as follows:

Area 1. The Bourne Valley. An urban fringe area running from the outskirts of Farnham over The Ridgeway as far south as the line of Pine Ridge Drive ? Burnt Hill Road ? Lodge Hill Road.

Area 2. The Bourne Green and Bourne Woods. Although it contains the heart of Lower Bourne, this area is marked by decreasing population density and more open areas and woodland. In the east it stretches as far as Waverley Abbey and thus includes a stretch of the river Wey. The southern boundary is the pronounced ride through the woods south of Gong Hill and Clumps Road.

Area 3. Farnham Heath. An area of woodland with some farmland but now dominated by the evolving heathland created by the RSPB on the site of former commercial pine woods. The southern boundary is taken as Reeds Road.

The only permanent water in the area is in garden ponds, the two streams having only seasonal flows. However, our area of interest does touch upon the River Wey at Waverley Abbey, thus opening up true wetland ecology.

The natural heathland vegetation of the area is currently best seen on Frensham Common, where common heather or ling dominates. Other flora are limited because not only do the soil conditions exclude all species not tolerant of high acidity, but also the heather occupies the surface very fully and casts a deep shade. Gorse manages to do well as do some other types of heather. There is also some bracken though this maintains itself with difficulty in the heather. Beneath this assemblage is an underlayer of lichens and mosses.

Quite a wide variety of trees also manage to establish themselves including pine, oak, birch, hawthorn, alder buckthorn, mountain ash and holly. Small patches of such woodland add to the attractiveness of the heath and are important for the wildlife. However, too many trees are a problem for those, such as the National Trust, responsible for maintaining the heathland and the Bourne Conservation Group has assisted with “pine-pulling” sessions at Frensham. The pine seeds probably originate from the nearby planted pinewoods.

At the RSPB?s Farnham Heath reserve in the next decade we will see the original heathland vegetation make a comeback. It has been established that heather seeds are still in the ground and will have a life of perhaps 80 years.

Throughout most of The Bourne it is trees that dominate the vegetation, whether it is in the pinewoods to the south or the small remaining patches of mixed woodland such as Paradise Wood, Burnt Hill Wood and all along the Bourne valley, where some fine trees exist. These areas have been largely unmanaged for many years, resulting in heavy growth and a great increase in the overhead canopy. This makes for some very dark footpaths and does not provide a favourable habitat for many plants and insects. Recent surveys have shown how important to wildlife are the heath and woodland verges and the wider rides through the pine woods.

Part and parcel of this lack of control has been the rampant growth of robust species such as holly, laurel and rhododendrons. The Bourne Conservation Group has spent much time and effort removing large tracts of these species to improve habitats for native insects and birds. In very recent years another invasive species, Himalayan Balsam, has arrived in the area and is quickly choking the banks of the Bourne Stream.

Some gardens with their specimen trees greatly add to the variety of vegetation in the area, but in the majority there is a preponderance of species such as laurel and leylandii grown for their “instant” screening ability.

Heathland supports its own distinctive fauna. Prominent on Frensham Common are sand lizards, smooth snakes, woodlarks, Dartford warblers and night jars. The heath also supports a very rich variety of spiders as is apparent to anyone who has seen the mass of webs in the early morning light. Within The Bourne, south of Gong Hill, there is also a small Site of Special Scientific Importance (SSSI) which supports a colony of sand lizards and other heathland species. This is adjacent to the very newly cleared RSPB Farnham Heath site which should now start to be colonised by similar species. The trees and gorse bushes that form part of the heath are important as song posts for the birds noted above.

The more open, deciduous woods support a variety of wildlife of all sorts including native mammals such as badgers, foxes and roe deer. The pine woods, however, support very little, even lichens being absent in the closely planted areas. All of the woods are important for bats which are basically tree-dwellers. A survey of sample areas of the RSPB reserve has shown that large numbers of bats use the site including common and soprano pipestrelles, serotines, noctules and brown long-eared bats. These may feed on insects associated with the pines and they certainly fly along the rides between the trees.

Crickets and grasshoppers are a feature of both the heaths and the sunnier parts of the wooded areas. Many species of crickets have been recorded locally in recent year including speckled, oak and bog bush crickets, and roesels. The Bourne valley was also, until recent years, the home of a colony of great green bush crickets but it has been concluded that these have failed to survive the increased level of human development and the lack of management of woodland in the valley.

In the built up parts of The Bourne, gardens play a vital part in the support of mammals, birds, insects and butterflies as well as retiles and amphibians through the existence of garden ponds.

The BCG have carried out one general wildlife survey in September 2004 and a series of bird and mammal surveys in 2005 as part of the Wildlife Warden pilot scheme. Further detailed surveys have since been carried out for the Group?s various projects. See old Churchyard Project

Detailed Report
In 2009 a detailed paper on local Ecology was prepared as an input to a Farnham Design Statement prepared by the town Council. This can be seen at: Ecology of The Bourne. 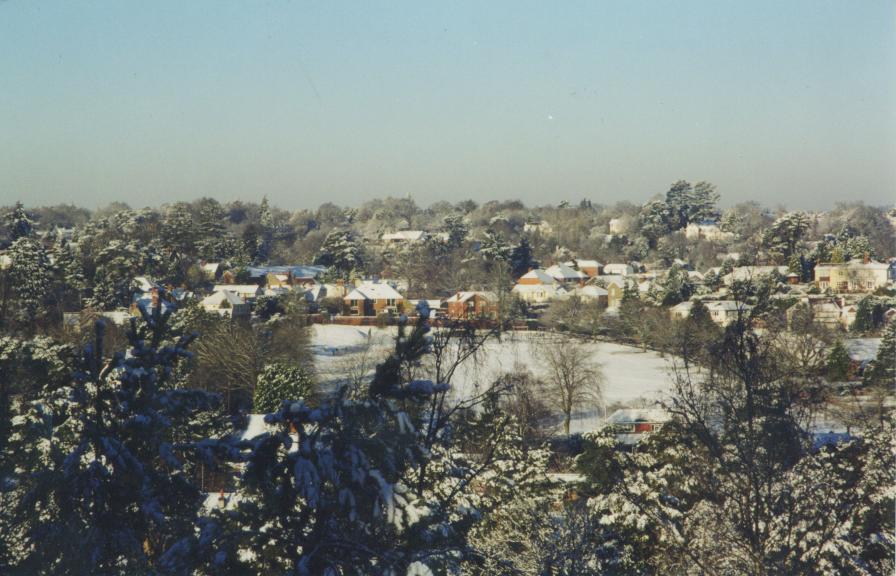 Winter comes to the Bourne Green