Climate effects in the Bourne

There is absolutely no doubt that we are witnessing marked changes in our climate. There are those who choose to ignore the science and argue that the changes are natural and nothing to do with our burgeoning emissions of carbon dioxide into the atmosphere and that it is arrogant of us to believe we can work such changes the planet. Whatever you believe there are signs all around us of how these changes are influencing our wildlife. Some are apparently benign but generally the underlying trends are very worrying and indicate big changes are afoot in our environment. 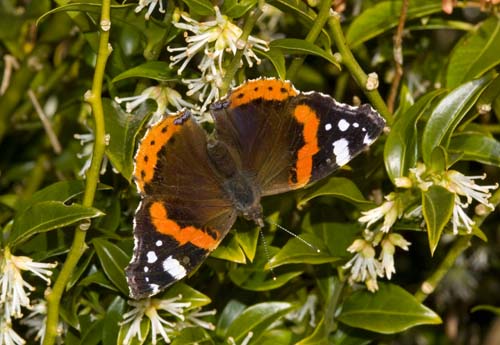 Red Admiral Butterfly (Vanessa atalanta) the remarkable thing about this picture is not the butterfly, but what it is feeding on. The plant is Sarcoccus, a winter flowering shrub, and this picture was taken in January 2007. Last winter was one of the warmest on record mean temperatures in the south of England were 7.0?C, 3.3?C higher than the average for 1961-1990. This encouraged many species to break their hibernation, and when this picture was taken hoverflies, bumble bees, and honey bees were feeding with the red admiral. Without this source of nectar these insects would merely have burnt up their food reserves and would not have survived. Everyone planting a butterfly garden should include some winter flowering plants, to enable these desirable insects to survive. For more information about our weather –
http://www.metoffice.gov.uk/climate/uk/location/england/index.html 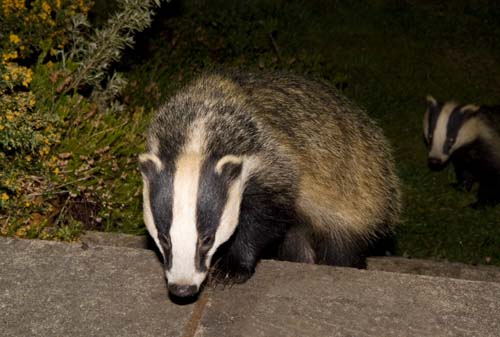 Badgers continued to visit our garden almost continuously throughout the winter. While warm winters are no bad thing for the pregnant females who can maintain their body weights and produce more cubs. The biggest climate threat is posed by the drier summers we have been experiencing. Badgers feed predominantly on earthworms and went the ground is dry and hard the cubs cannot get enough to eat. During the drought in October 1995 about 65% of cubs died. Major threats to badgers in our neighbourhood include creeping urbanization. Recent planning applications have been to increase the number of housing units by >50 on just four sites. Individually the proposals will have only very localised impact on our environment, but together they are eroding amenity for both us and Nature. Road kills are another threat to badgers nationally about 50,000 are killed each year, and one was run over in Old Frensham Lane in March. For more information about the impacts of climate change on badgers see http://www.ptes.org/action/appeals/mar03.html 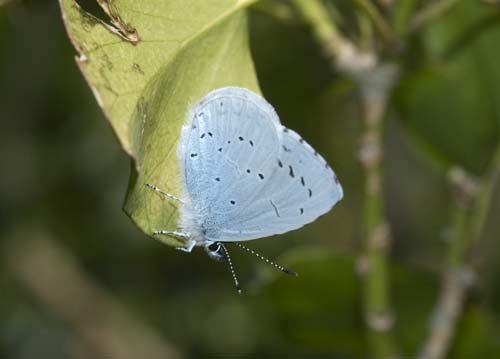 Holly Blue Butterfly (Celastrina argiolus). The spring brood of this delightful little butterfly emerged a fortnight earlier than normal this year in our Bourne garden, thanks to April being 5?C warmer than average. The spring brood lays eggs on holly, whereas the autumn brood feed mainly in ivy. What is worrying is that they may get ourtof synchronization with their food plants. The life cycles of so many of our insects are linked to specific food plants, and our birds also time their breeding to coincide with high availability of insects to feed their nestlings. If these cycles get out of synchronization then the changes will be disastrous for both. Study of these changes in seasonality are called phenology, and you can become a phenologist by submitting your observations to Springwatch at:- http://www.naturescalendar.org.uk/ and thereby help to track these changes. 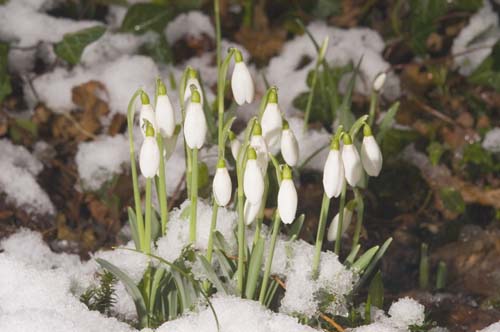 Snowdrops (Galanthus sp.) and bluebells seek to gain advantage over their competitors such as cow parsley and garlic mustard, by storing food in their tubers in summer, so that they can flower early and produce leaves before the woodland treed leaf out. When winter are warm, not only do their competitors tend to take up more of the available nutrients, but also shade them. The earlier leaving out of the trees also reduces the light they get. Interestingly trees respond differently to the changing conditions. Ash trees produce their leaves according to day length and so are tied to seasons, whereas oaks respond to temperature and so have been leafing out earlier. It seems likely that some of the scenes that are so much a part of the English countryside and our Bourne environment, of massed blooming of snowdrops and bluebells may become the exception rather than the rule. More information can be found at:-
http://www.naturescalendar.org.uk/findings/climateimpacts.htm 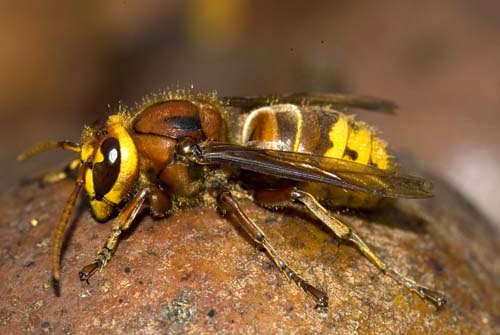 Hornets (Vespa crabro) are becoming far more common in the Bourne and are emerging earlier. These large wasps despite their fearsome reputation (the older ?children? amongst us may remember Desperate Dan?s encounters with hornets) are nothing like as aggressive as the commoner wasps. They are essentially woodland species usually nesting in tree holes. Thet over winter as queens, which usually emerge in May. But this year one flew on to my car?s windscreen as I drove down Firgrove Hill in April. They are useful, albeit rather scary, insects because they eat many insects pests, including spiders and other wasps. In autumn the queens gather on fallen fruit stocking up on their energy reserves for their winter hibernation. While there is no cause for concern over their increasing abundance, there is concern about the spread of the Asian hornet that has been accidentally introduced into Aquitaine in the south of France, which if it arrives in the UK will have a savage impact on our honey bees. For more information see:-
http://www.nhm.ac.uk/about-us/news/2007/may/news_11635.html 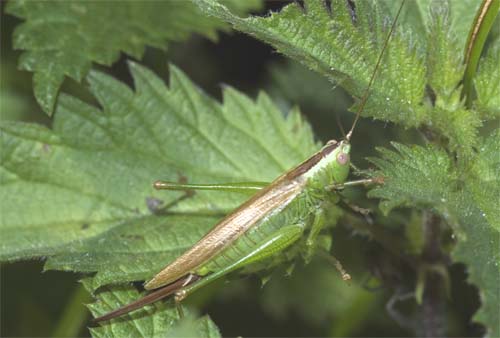 Long-winged conehead (Conocephalus discolor). This bushcricket is a recent arrival in the Bourne. It was only discovered on the Isle of Wight in 1931, mainland Britain in 1945, and in Surrey in 1990, moving north as our summer climate has warmed, and now according to David Baldock (Grasshoppers and Crickets of Surrey, published by Surrey WT) it has become one of our most common bushcrickets. To the audibly challenged its high pitched hissing song is inaudible, but the use of a bat-detector box makes it audible and reveals that on warm evenings in late summer male are calling from almost every nettle and bramble patch in open areas. Such new arrivals are by no means uncommon; the collared dove and the little egret that put in appearances along the Wey around Farnham this spring are other examples. They remind us that after the last glaciation the flooding of the English Channel prevented the re-colonization of Britain by many species of animals and plant. So our fauna and flora have remained less diverse than those in neighbouring France ? all the more reason to conserve the species we have and enjoy. Learn more about the conehead at:- http://www.gwentwildlife.org/longWingedConehead.htm