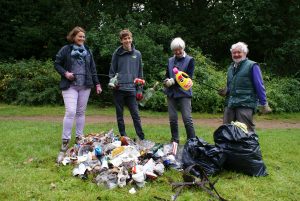 The subject of large amounts of litter that accumulate in and around Farnham is often the subject of comment in The Herald.  The delightful open space known as Langham’s Recreation Ground on the Ridgeway, given to the town by the first editor of the paper, unfortunately attracts a great deal of waste material of all sorts deposited by thoughtless walkers and picnickers. Disgusted at this at a place specifically designated as a children’s play area, The Bourne Conservation Group has for several years been endeavouring to keep the tide at bay with regular maintenance sessions.   Our team was again at work there on Sunday 10th September and collected a large pile of litter left on the grass or deposited in the bushes. Despite the menial nature of the task, members entered into it in a light hearted way, knowing that the end result would be good for all.

Our chairman, Noel Moss, said that the view of The Bourne Conservation Group and many other people on the town was that there is no excuse for just dropping litter anywhere instead of using the ample bins provided by the Council or taking it home. The seemingly never ending trail of bottles plastic containers, sweet wrappers and sandwich boxes not only spoil the look of the place but are also very bad for the environment generally and can be fatal for wildlife.