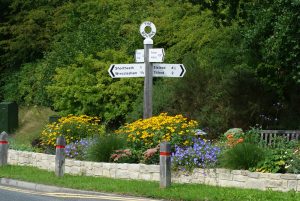 With the arrival of August, BCG can look back on the exceptionally busy and eventful summer enjoyed so far. It has been busy because of the combination of essential maintenance work , new projects and extra events such as participation in the first ever Farnham Walking Festival in May.

The constant burden of careful maintenance has certainly paid off because our various sites have looked good throughout the period. Nowhere has this been more apparent than at The Bourne Crossroads where the raised flower bed and associated flower tubs and baskets has attracted a stream of favourable comments from residents and visitors. The regional In-Bloom judges paused there on their way round the town on 11th July and we feel certain they have recognised the value of the work done to brighten up this constantly busy urban junction.

At the Middle Bourne Lane garden the emphasis has been on bringing to fruition the new pollinator-friendly flower bed commenced last autumn and only planted in February this year. By virtue of Cathy Stewart’s clever design and the meticulous preparation by Vivien Sinfield and other volunteers, the bed has matured in double quick time and has certainly achieved is aim of enhancing biodiversity on this rather shady site. 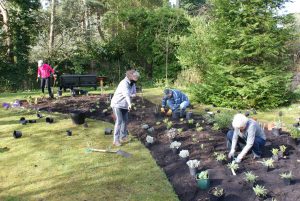 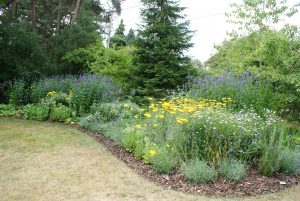 The Old Churchyard is a less public site than the others but still of great importance to a steady number of people who enjoy going there to enjoy its peace and tranquillity. We all recall its terrible state when we started work there in 2008 and it remains something of a battle to keep the unwanted undergrowth of laurel, nettles and brambles at bay to allow a gentler under-storey to flourish. The site was in good condition for the annual Palm Sunday service in April and certainly impressed members of the Haslemere Natural History Society when they favoured us with avisit in May. They particularly appreciated the pond which has been very much alive this year with plenty of young frogs now in evidence along with many other species. 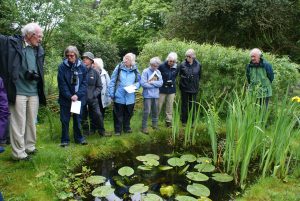 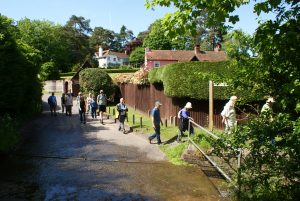 As a group we are now quite adept at conducting walks in our area and so it was a pleasure to be able to sponsor three events in the Walking Festival. These involved much preparation for which we are grateful to the three Walk Leaders and their helpers. Those who came to the walks appreciated the insights they were given into local scenery, history and conservation.

Our work continued with the visit of the national In Bloom judges on 7th August and  our preparations for a new small project to build some steps on one of the public footpaths in Sable Wood, a private site which under the careful management of Bruce Callander is rapidly becoming an important wildlife haven in our area. In September we look forward to carrying out a repeat of our very successful Water Walk of 2016, once again with the help of South East Water.