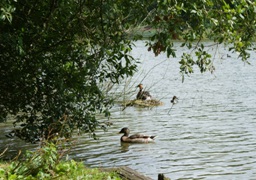 The Wey Catchment. The project we have started to improve aspects of the ecology of The Bourne Stream is of limited scope but it needs to be set against the wider background of work being planned for its parent river. The river Wey corridor has been identified as an Area of Biodiversity Opportunity and, with a view to realising its potential, the Surrey Wildlife Trust is leading a Partnership of all the interested parties of which our small Group is one. The initial tasks of this Wey Landscape Partnership are to:

* Raise funding for a series of projects throughout the catchment. An example is by-passing the weirs at Waverley Abbey which act as impassable barriers to fish movement.

* Cooperate with the Environment Agency in improving water quality.

The Bourne Stream. We have identified three sectors along the course of The Bourne Valley which is the dominant geographical feature of our area:

* From Alice Holt Forest to Sandrock Hill Road. Including the Lodge Pond, this is a predominantly rural area with woodland and farmland, for example near Manley Bridge.

* From Sandrock Hill to the Tilford Road. Although there are some open spaces in this sector it is largely urban in aspect and becoming increasingly so. There are many riparian owners whose land adjoins the stream and they have responsibility for maintenance.

* From Tilford Road to the river Wey. Once again this is a rural sector with the stream flowing through the Redhill House estate and a large meadow called Compton Field. The final stretch is through pastures between Waverley Lane and the confluence with the Wey.

Thanks largely to Martin Angel we have conducted a photographic survey of the whole length of The Bourne Stream and you may see the results at Preliminary Survey Report.

When we put all the results together they portrayed a dismal picture of the state of the watercourse and its banks arising from years of neglect by all parties. Some of the main problems are;

* Litter of all types ranging from plastic bottles to tractor tyres

* Serious fly-tipping at one point

* Obstacles caused by fallen trees and other objects

Faced with this we have now written a Project Plan to tackle the problems by stages. The main effort initially will be on Sector 3 from Tilford Road to the Confluence with the Wey. To that end we are bidding for money in the hope of starting in early 2013. Our aims are entirely consistent with those of the Wey Landscape Partnership and the Farnham Rivers Group. Given a successful outcome they should result in greatly improved ecology along parts of the valley ? but there is a long way to go. 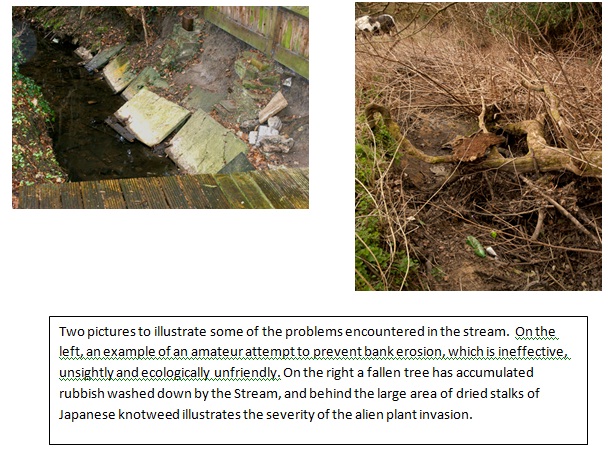 The Bourne Conservation Group (BCG) has been awarded significant project funding by South East Water to improve the environmental conditions of the Bourne Stream.

Last year we undertook a photographic survey of the whole length of the stream, and the results shocked and dismayed us. The lower reaches are rural, flowing past meadows and some ancient woodland, but far from being idyllic, they show all the signs of decades of total neglect. Numerous fallen trees and accumulations of debris are a serious flood risk and also a source of pollution. The biodiversity of the watercourse and the valley in general is threatened by invasions of alien plant species, including Himalayan balsam and Japanese knotweed. A large pile of fly-tipped rubbish is tumbling into the stream, further threatening the water quality.

The upper reaches of the watercourse are more built up and the problems are rather different. Efforts made by householders to minimise bank erosion are falling into disrepair. Along the banks there are overhanging trees and bushes that cast such heavy shade no ground vegetation can grow to stabilise the banks. Our volunteers have already trimmed back the worst of the overhanging vegetation, with permission of the landowners.

Our bid to South East Water was for funding for work in the lower reaches of the stream, specifically for clearance of:

?the fly-tipped material, and
?fallen trees, to be cut by chain saws and hauled out using heavy machinery.

Our volunteers will clear the debris and also remove the Himalayan balsam, which will be a continuation of a task into which we have made large inroads in recent years. BCG is very appreciative of the help received from and cooperation of the landowners. 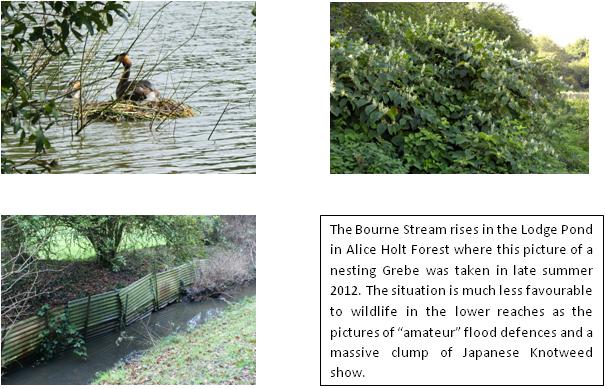