Japanese knotweed: are there triffids at the bottom of your garden?

Residents of Bourne Grove appear to be oblivious of a serious danger to their property that is lurking in their gardens along the banks of the Bourne Stream. While clearing Himalayan balsam from along the Bourne Valley a working party of the Bourne Conservation Group found large clumps of another even more dangerous alien plant, Japanese knotweed, flourishing there. This striking plant grows 2-3m high, producing plumes of white flowers in late summer. Its roots spread deep (3m) and wide (7m) underground and can grow through concrete, making short work of foundations, roads and flood defences. 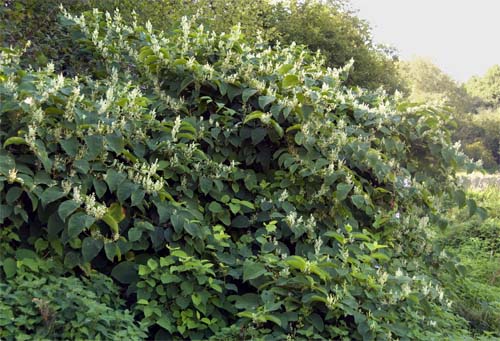 Introduced into Britain as a garden plant in the early 19th century, it has spread along water courses and in soil used for construction work. It is an unusual plant in that individual specimens are either male or female. Curiously all the plants in Britain are a single female clone, and so do not produce seed. But this has done little to slow its spread by pieces of its root being carried down streams or in soil used in construction work. A piece of root weighing less than a gram can regenerate a new viable plant within six days.

According to the Environment Agency it is now amongst the most dangerous alien plants in Britain. It not only threatens the native flora but also your property. Any soil within 7 metres of a growing clump has to be considered as contaminated, and it is illegal, stupid and antisocial to use it in any way for construction work, and fly-tipping is a real danger. It is one of only two plants that it is illegal to grow under the UK Wildlife and Countryside Act.

This plant can seriously damage your property and undermine its value. For example a developer had to pay over ?50,000 to clean Japanese knotweed from a site just 30m x 30m. The worst affected town in Britain is Swansea, where it is estimated that 62,000 tonnes of knotweed are growing which would cost ?9.5 million to eradicate. Can you or the Council not afford to take action against this dangerous invader before it really becomes established?